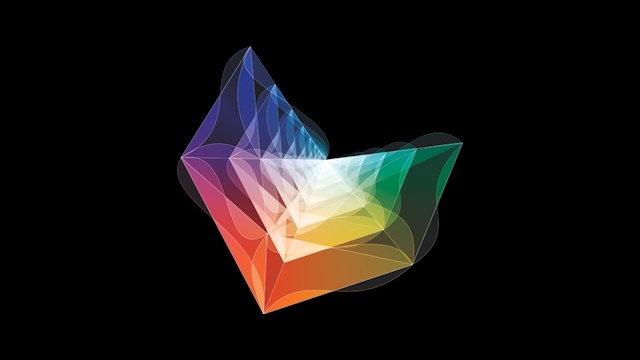 The is a new and exciting approach that makes it easier to calculate particle interactions and suggests that space and time are not fundamental parts of reality.

As many of you know I have long believed that time was an illusion - hence DarkTime. This work goes further and seems to show that both space and time are emergent and challenges the principles of Unitarity and Locality. The idea of Unitarity is that sum of all quantum mechanical interactions must be one and that of Locality is that particles interact only from neighbouring positions in Space-Time.

The approach taken is to map some of the most fundamental observables in physics (scattering amplitudes in gauge theories) on to a polyhedron, hence the name Amplituhedron. In my own doctoral thesis I was able to map all linear forecasting series into a geometric space and hence show that they were all simple abstractions of a generalised theorem and its solution. The advantages of this is that you can then use geometry to solve the often difficult equations. You can see why this methodology is appealing. Geometry maybe the reality!

The solution to solving scattering amplitudes was found by Richard Feynman, my hero, in what has become to be known as 'Feynman Diagrams'. For a simple interaction like a 2-gluon to 4-gluon process this would involve over two hundred diagrams and thousands of terms to calculate.

About ten years ago more patterns were spotted in the interactions and this gave rise to the much simpler and comprehensive 'Twistor Diagrams'. Next, some levels of recursion were found and a way of calculating the positive Grassmannian (volume bounded by the number of particles) became apparent. The volume of the Amplituhedron is then equal to the scattering amplitude.

Ok, So what does this mean?

The Big Bang and Universe arose from Geometry!

However, the amplituhedron formulation of quantum field theory does not yet incorporate gravity and this approach has been developed using maximally supersymmetric Yang-Mills theory which is a simplistic approximation to the particles known to exist.

I love the quote from the author 'In a sense, we would see that change arises from the structure of the object,' he said. 'But it’s not from the object changing. The object is basically timeless.'