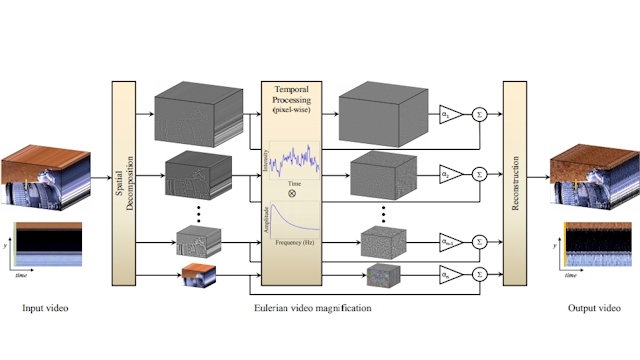 An algorithm developed by MIT can be used to show changes invisible to the naked eye in your video clips.

Eulerian Video Magnification creates visualisations of otherwise undetectable movements and colour shifts in video footage. It was announced in 2012 and the code posted online in August of that year but now the Videoscope web app created by MIT research partners Quanta Research Cambridge is offering the ability to upload your own videos to uncover hidden activity.

The technique looks at pixels in the video and takes a spatial reading. These readings are then amplified. The resultant colour and movement magnification means small changes which were previously invisible to the naked eye are suddenly obvious.

Initially the team were focused on medical applications such as monitoring the pulse and blood flow of newborn babies through minute changes in their skin colour.

"You want to touch [neonates] as little as possible, I'm told," said William T Freeman, a computer scientist at MIT who worked on the project. "We can [measure heart rate] as accurately as the conventional methods. We compared our measurement with an EKG attached to the baby at the same time and they agree."

But the technique can be applied to any video footage (the team diligently checked Christian Bale's pulse while watching a Batman movie as part of their project). As such Quanta is inviting anyone to upload a video to their app to discover previously undetected information.